Getting Rid of Subcontractor Claims

You are here: Home1 / News Archives2 / Getting Rid of Subcontractor Claims

Hi Rob,   I am the Area Manager for a program of building projects. Recently, we have been experiencing some subcontractor claims as we are closing out projects. How could Partnering help us prevent these types of issues emerging on our jobs?   - Struggles with Subs

There is an old expression, "buildings leak where subs meet". After working collaboratively on thousands of jobs, IPI Committee Members have learned that Partnering helps teams prevent two types of "leaks" - both in terms of project quality and also in terms of project conflicts.

It appears you have some "leaks" in your teamwork, which are allowing subcontractor claims to emerge late in your projects. This is a symptom of a greater problem - if you keep subs out of your project processes, they won't become a part of your collaborative team. You need a way to get them involved.

Think about these three common issues:

We posed this question to the IPI Vertical and Horizontal Committees and they said that timely cash flow is a great way to help reduce conflict on a job. If the GC is being paid timely, they are required by most contracts to pay the subs within 2 weeks or they will owe a steep interest penalty. If the GC is struggling with cash flow on the job, the subs are going to be the first to suffer. Does your billing department have a multi-step process for payment that is difficult to navigate and causes substantial delays? Many project teams have been derailed because they negotiate settlement to a potential claim, but then the billing department is empowered to review the settlement and refuse payment. You, as the owner may need to take a look in the mirror and fix your policies and procedures to ensure your program will be successful. Partnering is a forum where these billing issues can be shared so the GC can, at a minimum, understand how the process works and, at best, help brainstorm a work-around

Are your key stakeholders included in the process along the way or are they 2nd class citizens? Partnering is the perfect forum for including key stakeholders in the process, particularly as their work affects the critical path. In the IPI Matrix, we call this "Stakeholder on-boarding and off-boarding". Often, subcontractor claims emerge late because they have not been invited into the Partnering process. If you try to include them at the end, it is too late. Including subs from the outset will provide a forum for subs and key stakeholders to share concerns BEFORE they emerge on a project so the team can deal with them. This will also be an opportunity for the entire team to show the subs how committed they are to delivering a successful project. Peer pressure is a great tool for getting non-compliant project team members focused on the team's goals. A second way to include key subs is to invite the sub's Executive to the weekly project meetings. That way, the sub is no longer a 2nd class citizen. They will feel informed and included and will be much more likely to voice concerns prior to a claim being made. Sometimes a claim is the only way a subcontractor can get an audience with the owner. Prevent this by including them in the process when they affect the critical path! 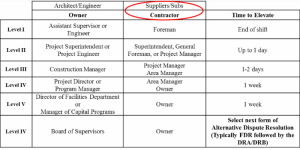 When your team received the claim, what was the response? Was the team caught off guard and did they fight it automatically? Was it escalated through the Dispute Resolution Ladder? Our IPI Committee Members told us that it is important to take time with subcontractor claims. Do the research, review the claim, develop an estimate and negotiate resolution to it.

Once you have researched the claim, make sure to hold a separate meeting focused on the resolution of that issue. The meeting needs to include members of the owner with settlement authority, the GC (who is representing the sub) and an Executive from the sub. Without the right people in the room, you will never resolve the issue. When teams attempt to fix the problem during a standing meeting, they tend to not have the right people in the room and they struggle. Remember, if an issue has been raised through the DRL, it will have some complexity to it. An issue resolution session will enable the team to resolve the issue and diagnose how the claim emerged in the first place so (ideally) it can be prevented in the future.

In summary, when you are managing a complex program of projects, it is important to have a forum for key subcontractors to be involved. Partnering meetings (and scorecards) are that forum! Some GC's have concerns about inviting subs to Partnering meetings-often trade secrets and dollar amounts of negotiated CCO's are discussed. However, the risk of sharing information is far outweighed by the benefits of having a subcontractor group who feels included in the process and who can provide expertise for project issues as they emerge.

Remember, you need a way to identify your teams "leaks" and you can only manage the risks you are aware of. Partnering provides a forum where the team can be made aware of "barriers to a successful project" like prompt payment, hear from key stakeholders who can have a tremendous impact on your project (transparency), and improve your management of risk overall on the project (so you are not hit with a surprise claim).

Hire a Facilitator with the Contract Change Order (CCO) Process